To watch previously recorded Masses, or to join online programme 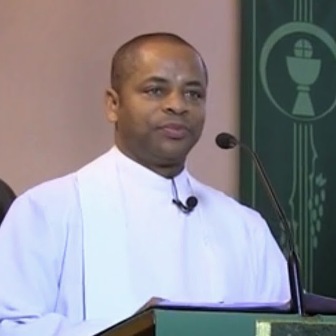 An established author, he has written The Sanctuary: A Handbook for Altar Servers (2005), Altar Prayer Companion (2008), The Stations of the Cross - A Diaspora Experience (2010), Channels of Prayer (2013) and Introducing the Marriage Meter (2018).

Father Innocent also organises programmes and workshops to assist young people and adults develop skills for Christian friendship and commitment in marriage. He promotes devotion to the Most Precious Blood of Jesus Christ. He loves Our Lady - the Blessed Virgin Mary and is a promoter of Marian spirituality according to St. Louis Marie de Montfort, St. Maximillian Kolbe, St. Mother Theresa and St. John Paul II. On his 20th Priestly Ordination Anniversary, he founded the Global Lay Apostolate for Priestly-Vocations, a Catholic Prayer Network, to pray for priests and for an increase in vocations to ministerial priesthood.